And Other Creative Lens Flares

Streak Filters can mimic the anamorphic lens flare characteristic of many cinemascope films. This anamorphic streak is a form of lens flare that appears as horizontal lines extending from bright light sources and specular reflections.

Streak filters can and do produce flares that precisely imitate the anamorphic flare. The most well known Streak Filter produces horizontal flares from bright lights and specular highlights in the scene. Recently developed filters can produce even more dramatic flares with various characteristics and the ability to rotate the flares for static flares at angles other than horizontal, or for dynamic rotating flares.

In the 1950’s box-office revenues were down because of new competition from television and suburban lifestyle changes following World War II. Hollywood responded with dramatic widescreen formats such as Cinerama, Cinemascope and Vista Vision.

The most popular and longest lasting of those formats was CinemaScope from 20th Century Fox.

20th Century Fox purchased the patent for cylindrical “anamorphic” lenses from Henri Chrétien and introduced a widescreen format that involved compressing the image horizontally in camera and expanding it to a widescreen aspect ratio in projection. This produced a high-resolution widescreen image using new lenses with existing cameras and projectors.

As ‘Scope matured lenses with custom properties were developed by Panavision and others to allow a widescreen image to be recorded conventionally, then “stretched” optically so the final image is projected to reflect a given aspect ratio using the cinema standards of 2.35, 2.39 or 2.40.

Aberrations (or flaws) in the design of these lenses created the single most identifying characteristic anamorphics are known for, their anamorphic lens flare, creating a broad streak of "searing" light emanating from any bright source of light in the frame. While the anamorphic streak is technically an error, that specific artifact defines so many great movies, they have ended up developing a certain cachet of their own in defining “cinematic” to many viewers.

Fast forward to the 21st century: Arri released their Master Anamorphics that were optically refined to the point that they did not create anamorphic streaks, which cinematographers and directors had come to love.

However the use of the anamorphic streak has not faded, The JJ Abrams stylistic reboot of the Star Trek franchise utilized a large number of flares forcibly created as part of the production design

Anamorphic Streaks for the Rest of Us

There was a need apparent in the market to create the “anamorphic streak” effect in camera with the new high-resolution anamorphic lenses that didn’t streak and also with standard non-anamorphic “spherical” lenses.

Ira Tiffen at OPTEFEX first popularized the use of filters to produce the anamorphic blue streak effect by laminating color-tinted cylindrical lenses between sheets of glass. When Ira joined Schneider Optics his team at Schneider began producing those filters. Now there are multiple styles available from Schneider, Vantage, Tiffen Filters, Formatt and the new Lindsey Optics Rota-Streak.

Streak filters mimic the look of an anamorphic lens flare, causing streaks on bright light sources or reflections in the scene. Streaks are created from any specular light source or reflection in the scene rendering headlights, flashlights, candles and any practical lights in the scene with the definitive smeary look of an anamorphic style streak. By varying the spacing of the rod lenses in the filter, Lindsey Optics provides filters that allow the user to choose stronger or weaker filters to increase or decrease the strength of the streak effect

Bringing the “anamorphic look” to a new generation of filmmakers via selective filtering allows smaller projects and independent productions to take on the look of big budget features, while maintaining the cost savings of working with standard spherical lenses instead of renting a set of the limited anamorphics available. 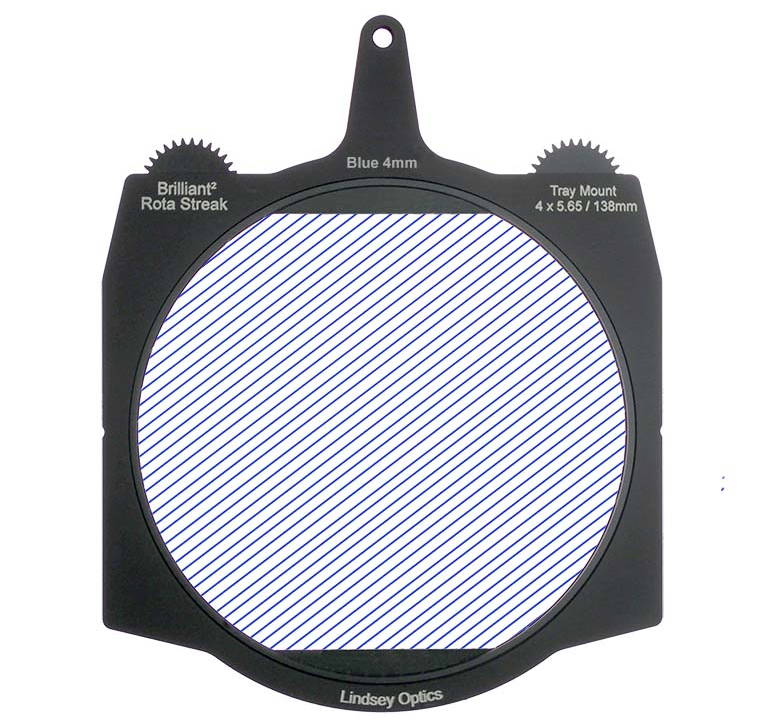 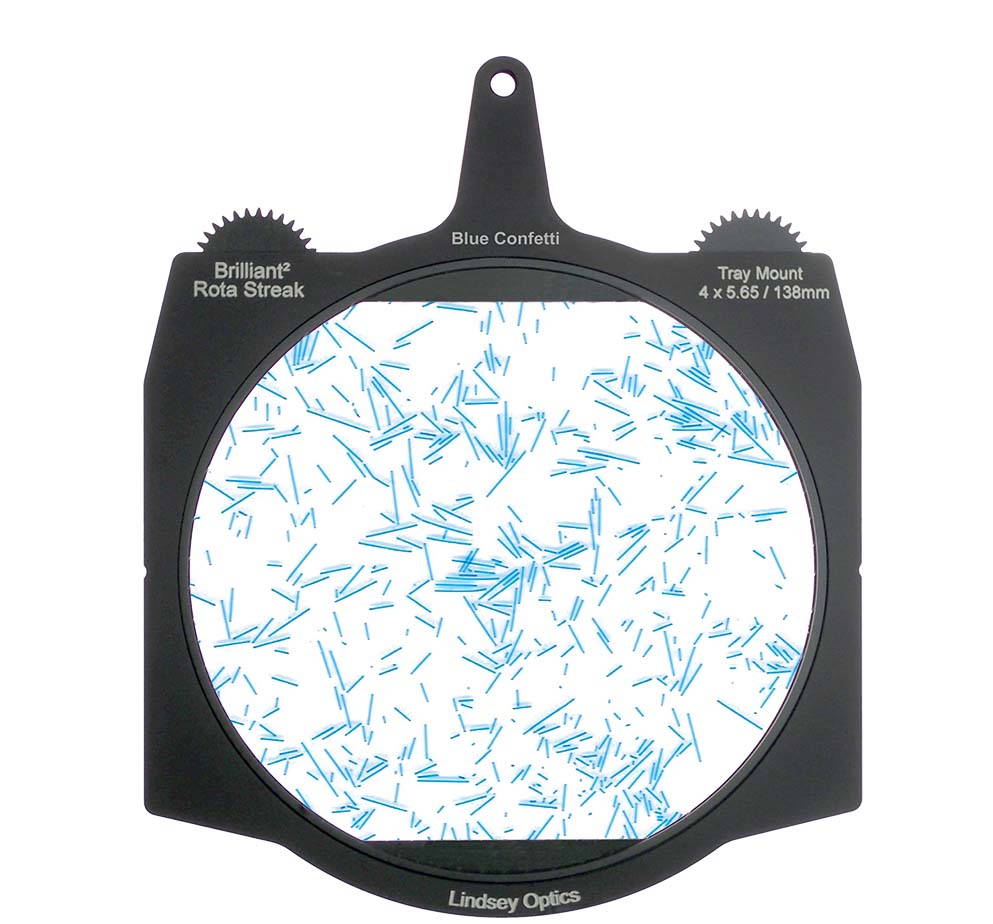 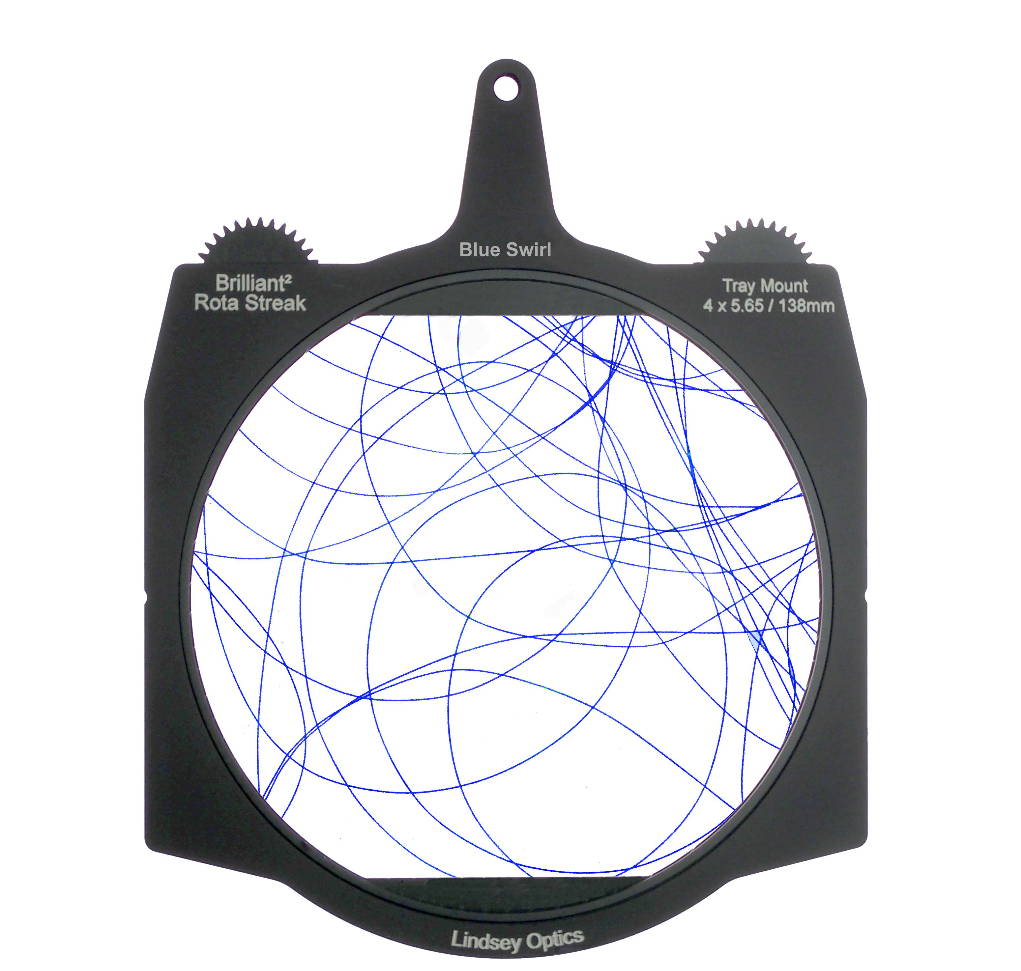 The Brilliant² Rota-Streak Filter is a new twist in streak filters giving creative options for in-camera streak, star and swirl streak effects on bright lights and highlights in any scene.

The rotating design of the Rota-Streak allows variable angle for static streaks and the capability to rotate the streaks for dynamic effects. Designed to fit most professional 4x5.65" matte boxes, the Brilliant² Rota-Streak Filters are constructed by mounting our 138mm Round Brilliant Streak filters in a geared rotating frame that fits in one stage of 4x5.65 matte boxes The rotating filter mount allows rotation of the streak effect to find just the right angle for the streak or allow you to motorize the rotation for dynamic rotating streak, star and swirl effects.

Lindsey Optics uses a unique manufacturing method to produce each streak filter, by laminating very small cylindrical rod lenses within the glass filter. By incorporating these lenses with different spacings and geometry, a variety of streak effects can be achieved. A closer spacing of linear lenses creates a stronger effect, a wider spacing creates a weaker effect. A diamond pattern creates a star cross effect and swirl patterns create beautiful elliptical flares on specular light sources and highlights. 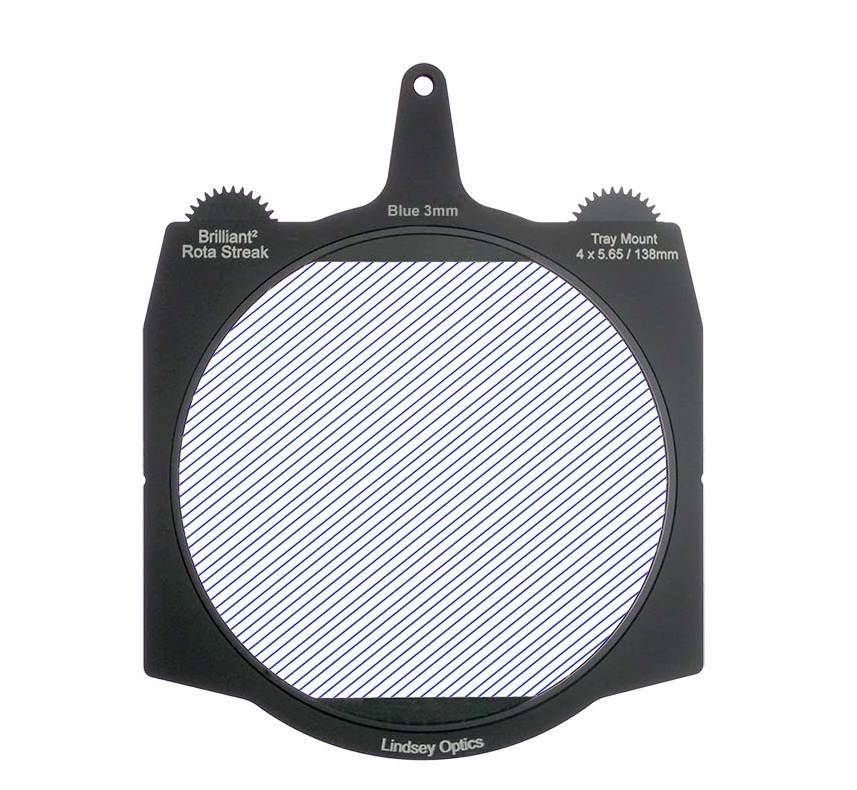